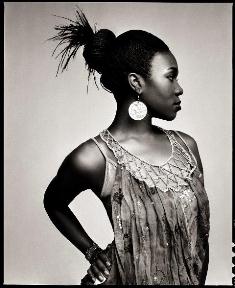 With the voice of an angel, India.Arie had the clothing to match. Dressed in a beautiful white dress (one that was given to her as a gift and not made by her mother as the majority of her clothes are), India strapped an ivory white guitar over her shoulder. This is a woman who radiates with light. From her stage presence to her lyrically uplifting messages, everything about this gifted performer glows with positivity. India had one request for anyone in the audience who wasn't familiar with her music; listen to the words.

For "Strength, Courage & Wisdom," India enlisted the backing vocals of the crowd. Dividing the men and the women into two separate vocal parts, nearly everyone participated. Often throughout the show, many people in the crowd were singing along. It sounded like a church choir.

"Talk to Her" was undoubtedly a favorite of the evening. India said she had written it as an anthem for herself, and it was obvious that many people have adopted her anthem for themselves as well. 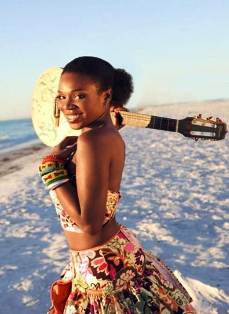 An incredibly beautiful song performed was "India's Song." You will not find this song on a CD though. India explained that this song is too special to her to give it away to a record label. It was moments and songs like these that were enriching with a fundamental message being offered. But there is definitely another side to Miss Arie as well; her sense of humor.

India performed the Sade hit "Sweetest Taboo." Afterward, India explained that she had toured with Sade and proceeded to share with everyone her favorite part of Sade's set each night. Doing a respectable impression of Sade, India dropped her voice about three octaves and used her arms and booty to mimic the movements. Apparently, her bodyguard's favorite part of each evening was the booty shaking.

With diverse musical taste, India spoke of the artists she respects. Ranging from James Taylor to Norah Jones to Stevie Wonder, India's taste in music is as open minded as her music. As the crowd danced in front of the stage, you could feel her openness infecting anyone willing to let go of themselves. Yes, there were those who sat back and observed, but within the sea of people dancing, they had no idea what they were missing. Being at an India.Arie show is like being at a spiritual party; inspirational, moving and maybe most importantly, a lot of fun.

TANGLED UP IN THE WEB

Get to know India even better by taking a look around her cyber world.

Song * The One
Album * Voyage To India
SEEING IS BELIEVING
© 2011 Pure Songwriters. All rights reserved.